Ancient Inventions in Use Today 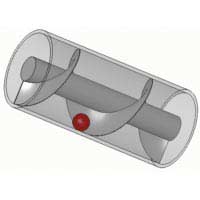 The Archimedes screw carries water from a low to a high area. The screw is therefore useful for irrigation and drainage.

The screw is in common use today in many countries. The inventor was Archimedes of Syracuse (c. 287 BC – c. 212 BC). Archimedes was a Greek astronomer, engineer, physicist and mathematician.

In the complex around the Great Pyramid of Giza in Egypt is a boat that’s more than 43 metres long. The Egyptians made it with planks of wood. They nailed these together and caulked them with pitch.

But there is evidence of far earlier boats. Archaeologists believe that people sailed to New Guinea around 60,000 years ago. These sailors crossed the sea from South East Asia. Boats also carried the ancestors of aborigines to Australia 10,000 years later.

The Ancient Romans needed a fast setting building material that allowed them to extend the range of their architecture. They already had ordinary mortar, but this was too slow to dry. It was therefore useless for lining tunnels or coating ceilings and domes.

By adding volcanic dust to such mortar, however, the Ancient Romans discovered fast-setting cement. This was ideal for more adventurous building work.

Although the materials for knives have changed, the concept of a small sharp instrument has been around for about two and a half million years.

The earliest knives were stone. Ancestors of Homo sapiens such as Australopithecus used them for hunting and cutting. Many years later, bone and wood knives appeared, followed more recently by knives of bronze, iron, copper and then steel.

It’s a little difficult to trace the exact origin of the first official postal system. Message systems have been around for thousands of years to relay information about events such as invasions.

The first postal system mentioned in extant documents was in Ancient Persia and dates from around 550 BC. The system relied on postal stations, between which horse riders carried the mail.

Reinforced concrete was another building development of the Ancient Romans. By placing metal rods into a cement-based mix, they found they had a strong and lasting means of construction.

Paintings on the walls of Ancient Egyptian palaces and tombs show twisted and braided rope in use for a number of activities. But two-ply rope fragments have also come to light in the Lascaux caves in France. The date of these fragments is 15,000 BC.

The Chinese, however, went one step further. They painted these parasols with a mix of lacquer and wax. The result was a waterproof umbrella.

There is some debate about the origin of the wheel. Many people believe it first appeared in the lands now occupied by Iraq in 5,000 BC. The wheel then spread to the Indus Valley (modern India and Pakistan) about a thousand years later.

The wheel may have arrived in Europe about the same time. There is a clay pot found in Poland that has a four-wheeled wagon inscribed on it. The pot dates from around 3,500 BC.