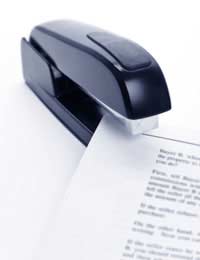 The single most important invention that transformed office life is probably the computer. But there are lots of other inventions that over the years have made their mark.

It would be unusual not to find a stapler in any office around the world. Office workers have come to rely on staplers as by far the best device for keeping a sheaf of papers together.

The French King Louis XV (1710 – 1774) owned the first stapler. But commercial staplers didn’t appear until the second half of the nineteenth century. The American inventors, George McGill and Henry R. Heyl both created early versions. But the stapler as we know it today first arrived in offices in the early 1900s.

Office calculators of one sort or another have been around for thousands of years. The most well known is the abacus. Another well-established calculator is the slide rule, invented by the English mathematician William Oughtred in 1622.

In the twentieth century, there were many manual and electric calculators. The size, complexity and cost of these machines limited their use.

The device that really transformed number crunching in the office was the portable electronic calculator. Japanese companies built and marketed the first models in 1970.

Pocket-sized electronic calculators soon followed and prices fell. In 1976, a calculator cost just a few pounds, and they became common in offices and homes.

Office workers may sit in the same chair for hours on end, every day of the working week. An office chair should therefore be as comfortable as possible.

The modern office chair is fully adjustable. An office worker can raise or lower it, move the armrests, and change the position of the back support. These ergonomic chairs suit each worker’s needs and help prevent back pain and RSI (repetitive strain injury).

Such chairs became a feature of office life in the 1970s. Before then, adjustable chairs existed but were not widespread.

Office workers everywhere hailed carbon paper as a wonderful invention. It allowed them to make instant copies of handwritten and typed documents.

Many people believe the inventor was an Italian, Pellegrino Turri. Ralph Wedgwood, however, patented a similar paper in England around the same time in the early nineteenth century.

Like a stapler, paper clips are a common feature of modern offices. The first patent for a paper clip dates from 1867 in the US. The inventor was Samuel B. Fay.

But the paper clip in use today probably originated in the 1870s from the Gem Manufacturing Company in the UK. Other countries and inventors have, however, laid claim to being the first to use and make paper clips.

Computers have now replaced typewriters. But it’s important to recognise the impact typewriters had on office work. When typewriters arrived, there was no longer a need to write documents by hand and to use the services of a printing company.

It’s hard, though, to credit one person or company with the typewriter’s invention. From at least the early eighteenth century, many people had ideas for a mechanical writing machine.

Perhaps the most relevant fact is that commercial production of typewriters began in 1867 in America. From then on, the typewriter developed rapidly. And by around 1910, there were standard format manual typewriters in use across the world.